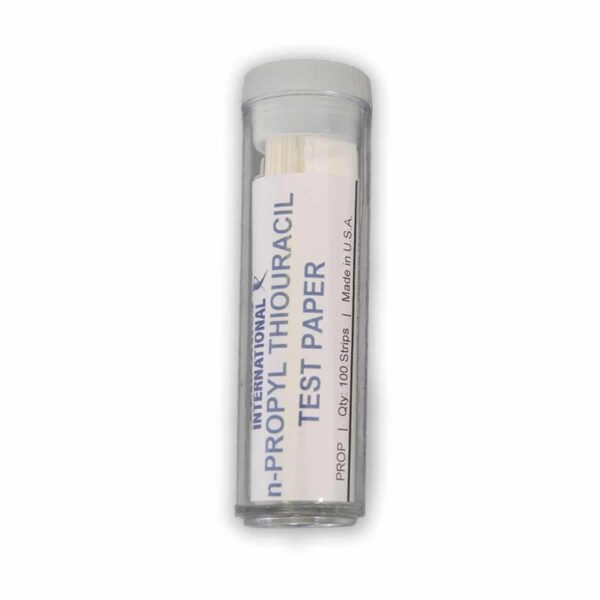 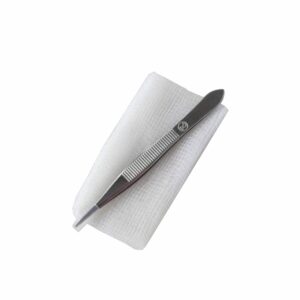 With these PROP taste strips you can test whether people taste 6-n-propylthiouracil (PROP) or not. Just like with PTC, the taste of PROP can be described as bitter, but the interpretation can vary greatly per person. These taste strips reliably identify the tasters and non-tasters and are completely safe, as PROP is only present in 3-5 micrograms per strip. Ideal for research studies and for demonstrations in the classroom.

One package (tube) consists of 100 PROP taste strips. The shelf life of the strips is 18 months after production. The production date of the taste strips can be found on every packaging.

Use of PROP taste strips

For a simple yes or no answer to the question “can I taste well” you can easily use these PROP taste strips. If you taste nothing but paper, you are a non-taster. If you have an excellent taste (supertaster) you undoubtedly want to spit out the taste strip due to its bad taste. People with average taste can sense the bitterness of the strips but will not find the strips disgusting. In this way you can distinguish between excellent tasters (supertasters), average tasters and non-tasters.

Among the Western population, around 70% of the population are PROP-tasters, while the remaining 30% are non-tasters. The average tasters are good for 50% and the supertasters are good for 25%. Women are more often super tasters than men, because they have more fungiform papillae and have more taste pores than men. The percentages of tasters and non-tasters vary between different population groups, for example there are more super tasters among Asians than among Europeans.

N-Propylthiouracil taste strips is perfectly safe to use. Per strip 20 micrograms of PROP is used.

Whether someone can taste this taste is genetically determined by a dominant gene. It is therefore not surprising that the PROP taste strips are used as a genetic test in studies. The genetically inherited property defines the ability to taste the bitter compounds: 6-n-propylthiouracil (PROP) and phenylthiocarbamide (PTC). PROP is a compound that contains the N-C = S group 7 and it is odorless and less toxic than PTC. In recent studies, the PROP taste strips are often used because PROP is odorless and it is a less toxic compound than PTC. Do you still want to use the PTC strips? We also have the PTC taste strips available.

Tastes differ, can you say something useful about that? Dr. Rietveld: “We behave much more to our instincts than you might think. Man is programmed to taste sugar and fat, because he needs that to survive. But not everyone tastes those substances equally well. Those who taste less may be inclined to eat more. Such a person is therefore more likely to become fat. ”Research has been done into people’s ability to taste bitter, in particular the bitter substance 6-n-propylthiouracil. Half of the world’s population is a moderate taster, 25 percent does not taste the substance at all and 25 is a so-called super taster.

It turns out that super tasters not only dislike Brussels sprouts and alcohol, but generally also eat less fat and sugar. There are more super tasters among Asians than among Europeans. “Children are often super tasters,” says Rietveld, “that is why they don’t like sprouts.” The physiologist has seen a revival of research into taste in recent years. “Molecular biology has given new life to research into taste receptors. Now it appears that it can play a role in the fight against the epidemic of obesity in the Western world. “